I have a new series of work based on the epidemic of gun violence in America. It has more to say about how America is slipping into a new normal, settling into a place where the outrage is suppressed, the deaths are accepted, and everyone “learns to live with it.” I say, “that’s UNACCEPTABLE!”

I Hate the New Normal. by Artist Gina M

Safety protocols and active shooter drills should NOT be the new normal.

Kids and teachers should not have to worry if they will come home in one piece.

And entering into a public space should not be ‘at your own risk.’

So, with all that, I create work. It’s top of mind. All the materials I see and use translates into a visual language expressing my outrage over the normalizing of a future that makes all Americans without a gun a victim. Or normalizes the idea that every American must have a gun. The NORMALIZING of this IDEA is UNACCEPTABLE.

I want you to feel the deep, enormous loss of innocence, of Life, Liberty and the pursuit of Happiness, with accepting this new normal and this apathy towards gun violence. I want you to WANT to protect it, before its lost forever.

I'll be announcing a Kickstarter campaign where I will raise enough money to send my new book, American Alphabet, the ABC book for change to all 535 members of Congress in Washington DC by January 2023.

Do something proactive to stop the new normal. Leave your email at the bottom of this web page and I will add you to the list to receive my American Alphabet Kickstarter campaign notices. The pre-launch starts October 6th and it opens for pledges on October 10th. Be the first to see the rewards and follow the progress

Here are a few sample pages.

Fabric collage inspired by the masters. 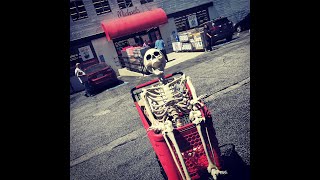 Making of the props for Girl Underwater 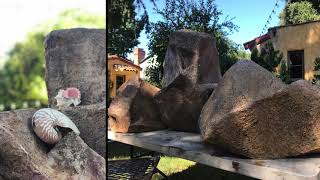 Making of the rocks for the Girl Underwater 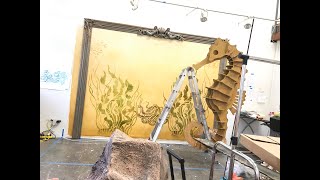 Making of the Mural for Girl Underwater

Making of the Seahorse for Girl Underwater

Making of the fish Mobile for the Girl Underwater 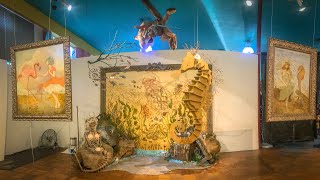 Girl Underwater: The making of a diorama